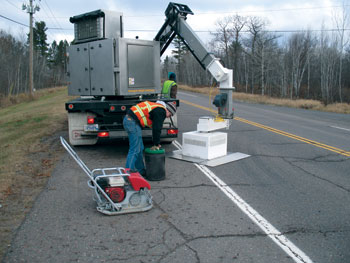 The microwave equipment is used to heat the pothole repair
and surrounding pavement.

In a sense, we’re still living in the olden days of pothole repair, when most are fixed by the “throw and go” process. Its name says it all—just throw in the hot mix of fill material and move on to the next hole. And you’ll probably have to do the same thing with the same potholes next year—if not next week.

But with a little help from microwaves and magnetite, the olden days may soon give way to a golden age of long-lasting pothole repairs. Research led by Lawrence Zanko, a senior research fellow at the University of Minnesota Duluth’s Natural Resources Research Institute, indicates that mixing ground magnetite—an iron mineral found in taconite ore—into the asphalt patch material and then “nuking” it with microwaves will seal the patch far more securely than conventional methods.

Zanko got the idea for using microwaves and magnetite about 10 years ago from his colleague David Hopstock, who had worked in the U.S. Bureau of Mines in the Twin Cities. The research project gradually grew, and the two eventually contacted Microwave Utilities Inc. (MUI), a Monticello-based company that had a prototype mobile technology that uses microwaves to thaw frozen ground.

Working with MUI designers and engineers, the researchers pursued a project with Anoka and St. Louis Counties to test the microwave and magnetite technology for pothole repair. Results were impressive.
“We did some repairs in an Anoka main street in April 2011, and they were holding up a year later,” says Zanko. Current side-by-side studies with conventional repairs indicate improved durability and longevity, but it’s too early to calculate the full lifetime of the repair.

The process includes removing excess water and debris from a pothole and adding a mix of ground-up recycled asphalt pavement and shingles and powdered magnetite. A generator then produces microwaves that travel through an aluminum tube to a stainless steel box placed over the pothole and surrounding pavement. Within minutes, microwave heating raises the repair area temperature. With mixing and compacting, the fill binds well to the existing pavement.

“What I like about it is that it’s particularly effective in winter, when so many other repair options don’t work too well,” Zanko says. “A week later those other repairs may be failing or gone.”

Zanko and his colleagues are also working on a new taconite-containing repair mix formula that sets in 10 to 15 minutes—without any microwaves. The new project is sponsored by the Minnesota Department of Transportation. Zanko is optimistic that at least one of the repair methods involving taconite will become standard for all seasons.

“We consider this to be semi-permanent to permanent,” he says. “Currently, if a repair lasts the season, it’s considered a success. But we think that when these [microwave and magnetite] repairs are done, they’re done.”

—Adapted from a UMNews article by Deane Morrison.