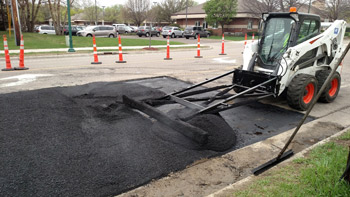 Problem: When dumping gravel and asphalt in smaller areas such as water main break sites, city staff were relying on a skid loader, shoveling, and a lot of hand luting to complete the job. This process was time- and labor-intensive and left a lot of material in the street to clean up.

Solution: The city purchased a skid loader attachment and modified it to allow workers to spread material faster, cleaner, and more evenly. Modifications included welding on a swivel plate, adding a hydraulic cylinder for leveling, creating and welding the tubing framework, and making screeds in different widths. It took 60 hours to create and cost about $1600. The attachment requires fewer workers, cuts the time it takes to do a job in half, and improves safety by helping keep workers out of traffic. 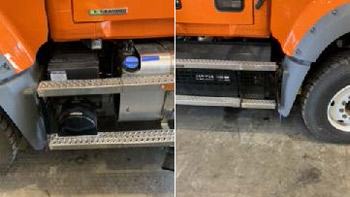 Problem: County workers could not safely scrape ice off of or clean the windows of their Mack trucks. It was dangerous trying to climb up onto the tire, especially while parked on the side of the road with other vehicles driving by.

Solution: The county purchased factory steps from Mack and modified them to make extensions to the existing cab entry steps, allowing workers to more safely climb up onto the truck tires to clean their windows. The modification process required sheet metal, square tubing, a welder, and a band saw, and it cost approximately $200 per truck for materials. The step extensions will reduce the number of slips, trips, and falls that may have happened when workers were climbing on things that said “no step” or trying to pull themselves up onto the big tires. 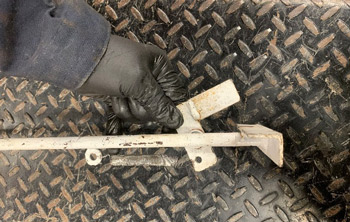 Problem: When installing chip-seal markers, county workers had to spend a lot of time getting on and off the tailgate of the pickup truck, walking down the road, and bending over to place each marker.

Solution: County staff created a chip-seal marker installation tool that allows one person to drive the pickup truck while another person in the back installs the chip-seal markers without getting off the tailgate. The tool took about one hour to fabricate and cost less than $20 in materials. Chip-seal markers can now be installed at a minimum of double the speed with the same number of workers. 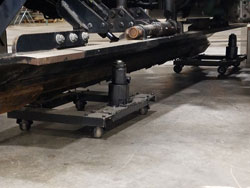 Solution: City staff developed a dolly system that allows trucks to stay on the concrete rather than being lifted up. The dolly system is used to lower the blade for removal, and then a bottle jack is used to take the pressure off the rods to pound them out. Once the rods are removed, staff can slide the dollies with the underbody blade out one side of the truck and put them away for storage. This new system is much safer and allows for a blade to be removed in roughly 45 minutes—half the time it took before. 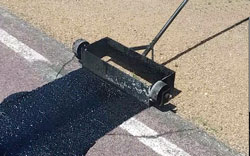 Problem: Large mastic boxes were too heavy for Jackson County staff to carry, so they were being dragged down the pavement, leaving a messy trail of product on the roadway.

Solution: Staff added a set of wheels to the mastic boxes, making it easier to move them between cracks on the roadway and keeping product from spilling out onto the road. Benefits of the project, which was completed using mainly leftover materials from other jobs, include minimized waste of product and reduced staff fatigue.

Problem: When road emergencies happen (water over the road, washouts, storm damage, crashes, etc.), the highway department needs to deploy signs quickly to the scene. The department's past practice was to load barricades and specific signs into a truck, load up sandbags to hold the signs in place, gather flashing lights or other accessories for each specific need, and then dispatch to the emergency. This took a lot of time to assemble, and the delay raised the public safety risk.

Solution: Crow Wing County staff came up with an idea for an emergency sign skid that could quickly be loaded onto a trailer or into the back of a truck for faster and more efficient responses. The emergency sign skid is pre-loaded with signs, sandbags, and accessories. One person can quickly load the skid and dispatch to the scene. 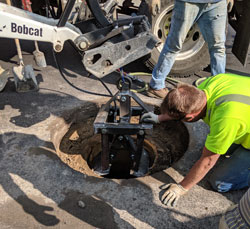 Problem: The city's Public Works Department rebuilds all manholes (about 500 per year) needing repairs and replacement during street improvement projects. During this process, employees stand on the street and remove concrete rings with jackhammers before manually lifting the broken pieces to street level. This work involves hours of extensive bending and lifting. Additionally, the task of cutting and jackhammering concrete rings exposes crews to silica dust.

Solution: The manhole ring lifter, a hydraulic lifting device that is attached to a crane on a truck, was designed to mechanize the removal of concrete rings. The lifter is first lowered by the crane into the manhole; then, a set of wings are extended to dislodge the ring and lift it to the surface of the street. This device eliminates the need for jackhammering and the manual labor of bending and lifting. 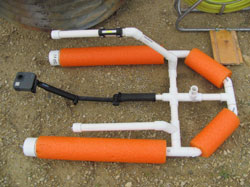 Problem: Olmsted County has over 1,600 centerline culverts that need to be inspected and maintained. To eliminate the need for staff to manually crawl through culverts, the county wanted to build a remote-controlled car similar to MnDOT's HIVE. However, there were some concerns about the HIVE design that the county wanted to improve upon to better serve its needs and systems.

Solution: The county constructed two sleds out of PVC piping, one of which includes floats for culverts containing water. The sleds each hold a 360-degree waterproof camera and lights, and they can be pulled through culverts with reel-mounted fiberglass fish tape. The camera records the whole culvert during the inspection, which allows staff to view any area of concern from multiple viewpoints to analyze if repair is required. Overall, the inspection tool has improved safety for inspectors and removes the need for staff to make decisions in the field because the recorded video can be analyzed at any time. 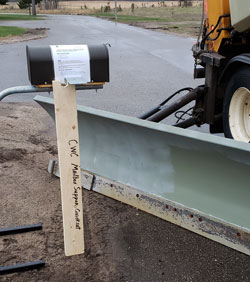 Problem: With more than 60,000 residents and 26,000 homes in the county, the highway department was encountering mailbox supports being set at varying heights. This caused problems when plowing snow; the wing plow could be used to clear snow under some mailbox supports, but not others.

Solution: The county's maintenance specialist made eight identical four-foot boards for measuring the height of mailbox supports. The boards were distributed internally and to mailbox support contractors working on the county's road projects to ensure that all who install or repair these supports are setting them to the same height. Standardizing heights means that fewer supports are hit by plows, ultimately saving the county money in replacement costs and causing fewer disruptions for residents. 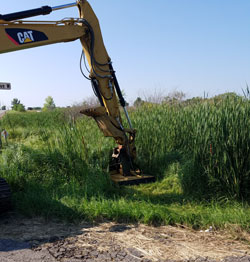 Problem: Public Works staff were unable to reach high overhanging branches and had to borrow equipment to mow cattails and overgrown willows in wet areas.

Solution: County mechanics used an old diamond mower deck to make a quick attachment that can be used on an excavator. The attachment allows staff to mow and clear unwanted vegetation that impedes visibility at intersections and eliminate overhanging branches on county roadways. 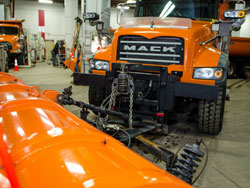 Problem: Winter roads, especially late in the season, can be especially rough, causing more stress on snowplow lift chains and plow lift parts as the heavy plow assembly bounces more. Broken plow lift chains are a common result and can take maintenance vehicles and personnel out of service for hours.

Solution: Maintenance personnel with Otter Tail County Highway Department created the Otter Plow Cushion with spare parts during downtime on a cold winter day. The device absorbs the shock of rough roads on the plow assembly and lift chains, improving ride quality and reducing the failure of the plow lift chains and parts. Once their stock of used parts was depleted, the department maintenance staff found they could purchase the needed parts new for about $431 per plow. 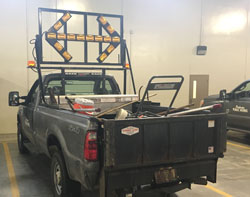 Problem: The city's infrastructure maintenance crew members had to climb into the back of the truck and physically lift/lower the electronic arrow board into position. The arrow board has to be lowered before moving to a new worksite in order to avoid it being caught in low-hanging trees.

Solution: The arrow board is now raised and lowered by a hydraulic pump operated from inside the vehicle. This eliminated the need for staff to climb into the back of the truck to raise and lower the board manually. Additionally, the new system allows the arrow board to be raised 18 inches higher than before, making it more effective at traffic control because it's more visible. 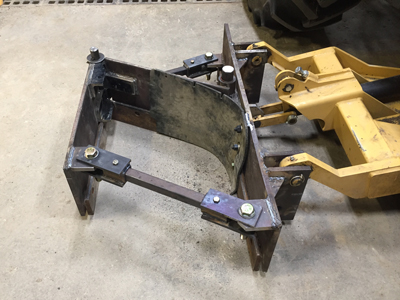 Problem: After spring road restrictions and before the county begins its normal summer road maintenance, staff fill the slow period by shouldering the county's roads using available equipment. In the past, the county has added a shoe to the end of the moldboard on the motor grader or to the end of the wing on a plow truck to accomplish this task. However, using this equipment took away from production and other maintenance activities.

Solution: The county fabricated a tractor-mounted shouldering box, which allowed the county's motor grader operators to remain on their regular blade routes without interruption and freed up a truck to haul shouldering material. As an added benefit, the box of the tractor-mounted unit keeps gravel material on the shoulder with minimal spill onto the roadway. Savings achieved included enhanced visibility, minimal cleanup, increased speed due to visibility, and increased safety for the traveling public. 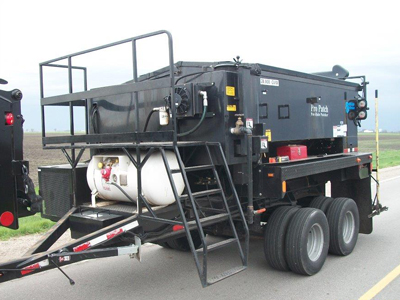 Problem: Members of the county's patch trailer crew had no safe way to load tack oil into the top of the machine without climbing on the trailer tongue and then the propane fuel tank to reach the fill port. In addition, the tack oil dispensing wand was too short to reach more than one lane of the road surface without positioning the truck/trailer between both lanes of traffic on two-lane roads.

Solution: County staff designed and fabricated a platform with an access stairway that allows workers to safely maintain three points of contact while ascending and descending the platform to perform required duties, including filling the tack oil tank, monitoring asphalt material hopper levels, and servicing the tack oil pump. Staff also designed and fabricated a swinging boom to support the added weight of the extended tack oil dispensing wand to reduce operator fatigue and provide an extended reach for two lanes of traffic and roadway shoulders. The boom also prevents the excess hose from lying on the roadway, thereby eliminating tripping/entanglement hazards for the other workers on the patch crew.